Thermomix, thermomix how do I love thee, let me count the ways!

Yes, yes, I know I just told you that it was a love hate relationship - but the other night Thermie did himself proud!

How can you not love a machine that minces, steams, cooks your mashed potato, and also makes your sauce!  I basically used the thermomix for all components of this meal.

I started out by making my own mince to make the meatloaf.  I then cooked Garlic Paris Mash, then left it to keep warm in the Themomserver (wonderful invention!!) - placed the meatloaf in the Varoma, put the sauce ingredients in the bowl, and let Thermie do his stuff!!  I could have even steamed my peas in the bottom compartment if I had desired (but decided to cook them with a little mint and sugar in the water (my favourite way!!)

It's funny this recipe reminds me of a Sicilian Meatloaf that I used to make 20 odd years ago.  I am not sure where the recipe is, so I am going to have to experiment and see if I can make replica meatloaf from memory - it was pretty darn good (if memory serves me correctly!!!) 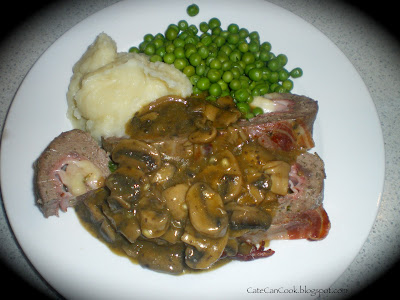 
2 cloves garlic
several rosemary leaves
1kg beef, cubed (such as rump steak - do not remove all the fat - you need a little!!)
1 small bunch of parsley
60g parmesan cheese (grated previously)
2 eggs
80g breadcrumbs (I used the garlic cheesy bread I made the other day!!)
salt and pepper to taste
sliced ham
pancetta
mozzarella cheese

Place the garlic and rosemary and parsley into the TM bowl and chop for 6 seconds on speed 6.  Remove from TM bowl and place in a bowl.

Chop small amounts of the cubed steak, probably no more than 200-300g at a time, into the TM bowl.  Set dial to closed lid position and pulse the meat on Turbo 8-10 times, or until chopped up.  Repeat with remaining meat.

Place the minced meat, the chopped garlic, rosemary and parsley back into the bowl.  Add the parmesan, eggs, breadcrumbs, salt and pepper and process on knead for 30 seconds.  Scrape down bowl and repeat, making sure all the ingredients are incorporated. 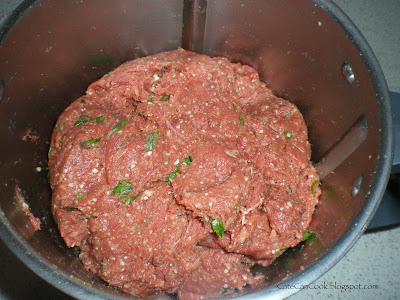 Place a large rectangle of foil out on the bench.  Remove the mince mixture from the bowl. Place the mince mixture onto the foil - spread out until it is a large rectangle.  Top with slices of ham, then top with grated mozzarella.  Roll up like a swiss roll, making sure the seams and ends are covered over and smooth (you don't want any lovely cheese escaping!!)  Top with several slices of pancetta. 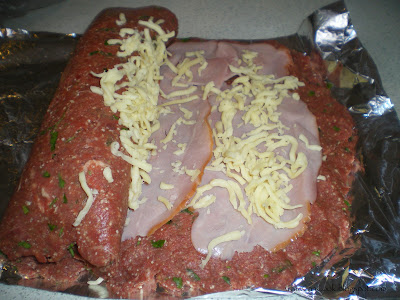 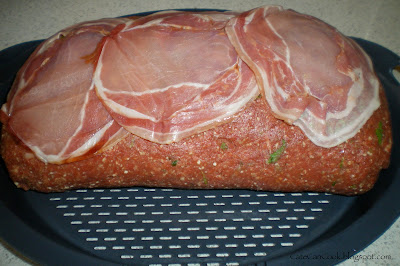 Lightly oil the tray of the varoma, place the meatloaf on the tray.  Now the meatloaf may be a little too big to get the lid secure.  You may have to push a little to make sure the lid is not going to let too much steam escape.  I did the best I could do, then placed a couple of cans on the top for good measure!!!

In order to make the mash and the sauce you will need to cook the mash in advance and keep warm in the thermoserver.  The TM makes a wonderfully smooth mashed potato - worthy of any good restaurant.  When I lived in California I lived near Gilroy - which supposedly is the garlic capital of the world!!  Here I learnt to make a lovely garlic mash - so tonight I decided to experiment and added several (oh around three or four cloves of garlic to the potatoes as they were cooking).  The result - beautiful smooth creamy, garlicy mashed potatoes!!!  I won't give you the recipe - if you have the Thermomix cookbook simply add the garlic - if you don't just add garlic to the water as you boil the potatoes mash the garlic into the potatoes!!

Place the shallot into the TM bowl - chop for 5 seconds on speed 7.

Add the mushrooms and saute for 5 minutes at varoma temperature on reverse and soft speed.  You will also want to place the varoma (with the meatloaf) on top at this stage.

Make sure you put the varoma back on top!!!  Cook for 60 minutes at varoma temperate on reverse and soft speed.

Now the juices will run a little pink due to the ham in the middle.  Test it with a skewer and if you think it is not cooked right through cook for an additional 10-15 minutes.  You may at this stage like to brown the pancetta on the top slightly under a grill - your choice!

Check the mushroom sauce, and season to taste.

As I said, you may also like to steam your peas, or vegetables of choice in the varoma while you are cooking the meatloaf and sauce.

So there you have it - a meal produced entirely in the Thermomix - gotta love that!!!! 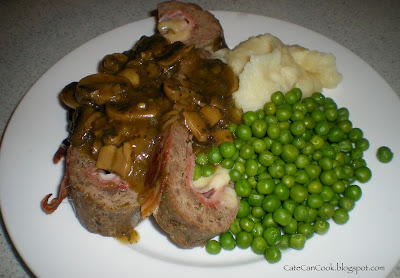 So what was the verdict - pretty darn good!!!!

Now remember the more fat you remove from the meat - the drier the mince mixture will be.  DON'T REMOVE TOO MUCH!!!!  You can alter the flavours with the meatlof and place whatever you like on the meat before you roll it- such as sundried tomatoes, hard boiled egg slices.  Next time I am going to add a little tomato puree to the meat mixture (for some added moisture) and perhaps even a little spinach!!

Will definately make this one again!!  Very easy - very tasty!!!
Posted by Cate at 6:23 PM